WIP It Up Wednesday – Melissa and the Medic Melissa and the Medic was due to be published by Blushing Books yesterday, so hopefully at the time of this post, it will be on sale on Amazon and Blushing Books. If it isn’t there yet, it hopefully won’t be too long!

I am thrilled yet again with the cover art designed by Blushing Books. This perfectly portrays Melissa:- 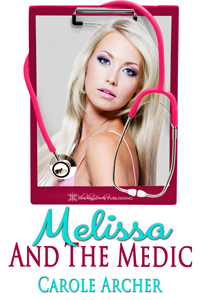 Melissa and the Medic follows on from Melissa’s Punishment Examination, but you don’t need to have read the first book as this could be read as a stand-alone book. However, I would be very happy if you decided to read the first book too, which is available on Amazon, Barnes & Noble and All Romance ebooks.

This extract is taken the Monday morning following Melissa’s Thursday afternoon punishment. She is getting ready for work, and preparing to face Jason for the first time since her humiliating experience:-

Monday morning arrived too quickly for Melissa. She reluctantly dragged herself out of bed the very minute her alarm clock sounded, determined not to be late for work.

Standing under the hot spray of the shower, she closed her eyes as she soaped her body, instantly recalling the feel of Jason’s strong hands on her. She swallowed hard, her fingers slipping between her spread legs. Leaning against the wall of the small cubicle, she took down the shower head, twisted it sharply so the spray came out in one forceful jet, and aimed it between her legs.

As the water pounded directly onto her hard clit, Melissa’s knees buckled. Panting, she tossed her head back and trembled, crying out as a powerful orgasm took hold and she slid slowly down the tiled wall, her body gripped by spasms. She slumped to the floor, the shower head slipping from her hand. With her eyes still closed, she was unaware of it swinging freely within the small cubicle, like a manic pendulum, haphazardly spraying water all around her.

Finally, she regained her senses, and her ragged breathing returned to normal. Opening her eyes, she firmly gripped the shower head, stood on shaky legs, and fastened it back into its holder. Steadying herself with one hand against the wall, she tipped her head back and allowed the water to run over her until she felt alert once more.

Turning off the shower, Melissa stepped out of the cubicle and rubbed herself down vigorously with a towel. Sitting on the edge of her bath, she smoothed lotion over her body, taking great gulps of air as her heart continued to beat fast inside her chest.

Eventually calm, she returned to her bedroom, where she rummaged through the contents of her wardrobe. Taking several outfits from their hangers, she laid them out on her bed and pondered over what look she wanted to go for; sultry, sophisticated, sexy, flirtatious, smart, casual, or business-like. She tried various combinations, posing in front of the mirror and frowning before changing clothes once again.

Jason’s first impression of her, she realized, had not been a favorable one—at least in her eyes. Frowning, she remembered how hard his cock had been when he had entered her. Reconsidering, she accepted that he had clearly been attracted to her, as she had to him, but she wanted to start afresh. She hoped he might find her attractive enough to date, and not just see her as someone to have sex with. After what had gone on in the doctor’s office, it was hard to imagine he could see her in any other light, but she hoped to be able to persuade him there was much more to her.

If this book is released before this post goes live, I’ll add links below for Amazon and Blushing Books. If not, I’ll share the links via my blog once it is released.

Thanks for stopping by my blog and reading my offering, and don’t forget to go and read the offerings from the other authors contributing their works in progress to WIP It Up Wednesdays.

2 Responses to WIP It Up Wednesday – Melissa and the Medic