All the fun of the fair!

I had intended to finish the final chapter of my new medical play story this weekend, but my sister decided she wanted to celebrate her 50th birthday in Blackpool. It’s been some time since I visited this town, in the north-west of England, and although it’s a little tackier than I remember, a great weekend was had by all 15 of us.

We visited the dungeons, where I swear my heart stopped several times. I was frightened of the dark, things jumping out, objects touching me in the darkness (and certainly not what I would want to be touching me in a darkened room!), the actors who played their parts excellently and with much conviction, and the final thrill(?!) of the Death Drop ride at the end. My photo was by far the worst of those on display in the foyer as we left afterwards – taken just as I screamed loudly, eyes screwed tightly shut, mouth wide open, I had clearly lifted up from the seat, and my hair was stood on end as we dropped swiftly down. The males either side of me looked quite unmoved by the experience, though one believed my scream might have perforated his eardrum.

Throughout the dungeons experience, I screamed as our chairs in the darkened room tipped back, when hands played with my hair in the darkness, when we were plunged into darkness in the corridor, and at various other times. If there was an award for the most frightened, I would have won hands-down.

We enjoyed fish and chips by the sea (or sausage and chips in the case of my niece), and she watched dumbfounded as her sausage fell to the floor and was swiftly plucked up by a greedy seagull. It was promptly mobbed by other seagulls who wanted their share.

We also went to the Madame Tussaud’s waxworks, which was considerably less scary than the dungeons. We had fun posing with our favourite stars, though I was not so amused when I posed with Scottish talent show singer Susan Boyle, only to find that my colleague who told me I look like her was in fact correct. I definitely need to get a new hairdo! We had more fun trying to guess who some of the wax models were, and there was much amusement at how poor some of them were. On the whole though it was a fantastic experience.

When I was younger I used to spend a whole week there every year, though sadly – like many other things – it isn’t the same. Times have changed and it’s no longer the holiday destination it was then, but for a fun weekend away, doing something different, I would wholeheartedly recommend it. 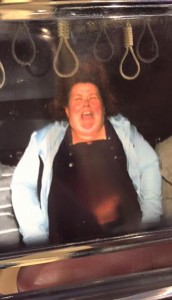 Hope you’ve had a good weekend.