Merry Christmas. I hope you’re enjoying the holidays, and have had a fantastic Christmas.

I had a lovely Christmas Day, spending time with various family members. I was truly spoiled this year, with seemingly endless presents. The greatest gift for me though was to see my latest book, Sentenced to the Punishment Clinic, doing so well. Released a couple of weeks before Christmas, it started off slowly, but after a few days it shot up to beat the highest rank of my previous book (Melissa and the Medic, 6,090), then it exceeded my expectations by rising as high as 777 overall (beating my highest rank ever of 977 with The Highlander’s Maiden). I have never got into the top ten of BDSM before, but with this book I rose as high as number three. And to get to number one in science fiction erotica (my very first number one EVER) is an absolute dream come true. When I got there, I suspected it would only last for an hour or two. But it’s lasted for almost a week, and I was still there on Christmas Day – my own Christmas number one!!!

For this week’s Saturday Spankings, I’m going to share another extract from Sentenced to the Punishment Clinic. My story is based towards the end of this century, where harsh punishments have been introduced for non-violent criminals. Serial burglar Maria Davis finds herself ordered to serve a day at one of the city’s newly formed clinics, where medical punishments (including anal play and enemas) and spankings are commonplace. Despite her horror at her treatment, Maria cannot deny her mounting arousal as Dr Carter, his nurse Nancy and security guard Scott guide her through her humiliating punishment. This snippet is taken from when Maria is handed over to Scott and she refuses to comply. He orders her onto her hands and knees before removing his belt. 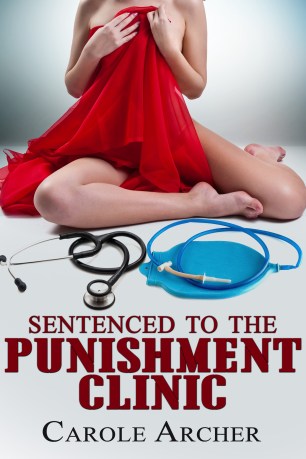 Maria glanced over her shoulder, trembling as she watched him grip the buckle and wrap the belt around his hand, leaving a long length trailing down. Trembling, she leaned forward, placed her hands on the floor and thrust her backside out, offering it to the handsome guard. Moving slowly into position, Maria never took her eyes off the thick, supple strip of leather as Scott toyed with it in a tormenting manner that made her shudder.

“Stay in position. Don’t move,” Dr. Carter told Maria, sitting on the chair in front of her and pressing his hand against the back of her neck, pushing her face towards the floor. “Stick your bottom further out. Give Scott a good target.”

Remaining on her knees, Maria thrust her behind out as far as she was able, yelping when without warning the belt lashed across her cheeks. The doctor’s hand remained clamped at the back of her neck, and she made a conscious effort to raise her hips again, despite the searing heat spreading across her rump.

Having a book reach number one in a sub-category is the best feeling ever, and something I never thought I would experience. I hope all authors manage to attain this at least once in their lives, so they too can bask in the sense of pride such an achievement brings. It would be nice to think one day another of my books might do as well, but if not I can live on the fantastic memories of this feat – and it makes it doubly satisfying that it happened at my favourite time of the year. My family and friends are so proud of me, and I don’t think anything at all could have spoiled this for me. I’ve been on cloud nine all week. Thank you to everyone who has bought Sentenced to the Punishment Clinic and helped it to this position. I am truly grateful to each and every one of you.

If you enjoyed the above extract and would like to read more, Sentenced to the Punishment Clinic is available at Amazon.com, Amazon.co.uk and Barnes & Noble.

Don’t forget to head over to the Saturday Spankings blog to see what offerings are available during the festive period.

Enjoy the rest of the holidays.

5 Responses to Saturday Spankings – Sentenced to the Punishment Clinic