Melissa and the Medic 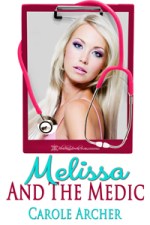 Melissa Martin is reluctant to return to her job as receptionist at the private Manhattan clinic run by Dr. Ben Williams and his wife, Barbara, the practice nurse.

After they caught her bunking off work to spend time with her friends, they gave her a series of punishments so humiliating, she doesn’t know whether she can face them ever again. Her embarrassment was intensified because handsome trainee physician assistant, Jason Jennings, had promptly been invited to join in and assist the doctor and his wife in disciplining Melissa.

Despite her shame and mortification, she found herself irresistibly attracted to the young man due to join the team for a four week placement – and as much as she hated the spankings, enemas and other discipline meted out to her, she was helplessly excited by it as well.

Buy this book on