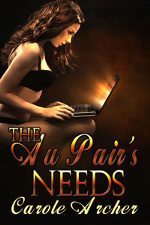 After a series of bad experiences in her native England, twenty-two-year-old Emily Pearson had decided that it was time to give up on her dream of finding a man to spank her properly. In order to commit herself completely to leaving her old life behind and starting fresh, she takes a job as an au pair in the United States.

Unfortunately for Emily, she just can’t leave her needs behind. She is immediately attracted to her new employer, a handsome single dad in his late thirties named Daniel. A single slap on her bottom from him, although seemingly an isolated incident, rekindles within her a passionate desire to be spanked and disciplined by a strong, firm-handed man.

Believing that she cannot get what she needs from Daniel, she instead looks for satisfaction on the internet, until finally she has the house to herself one day and she works up the courage to invite a man to come over and spank her… on Daniel’s bed. When Daniel comes home early and catches her in the act, Emily finally learns what a long, hard, bare bottom spanking is really like, and she also learns that a naughty young lady’s bottom can be disciplined in other ways as well.

Buy This Story From