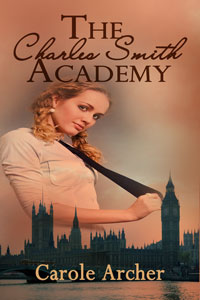 The Charles Smith Academy is the second book in the Charles Smith series, which follows the relationship between Charles and Hazel and Jenny, the two young women he took in off the streets of London.

Jenny has received frequent spankings from Charles ever since he saved her from an almost certain prison sentence, but until very recently Hazel had managed to avoid discipline. Now that Hazel has discovered that being spanked, although painful and embarrassing, is not as traumatic an experience as she imagined, she finds that Charles’ firm but loving chastisement can play a much needed role in her life.

Despite their desire to behave well, however, Hazel and Jenny often stray far from the proper behavior expected of them. When Charles is pushed too far, they are shocked to discover that being spanked on the bare bottom is far from the most humiliating form of discipline he is prepared to employ.

Meanwhile Hazel and Jenny continue to explore their relationship and fall ever deeper in love, but suddenly they find their happy union in jeopardy. Is their love strong enough to conquer the problems they face or will Jenny walk away from the only two people who’ve ever loved her?

Buy this story from