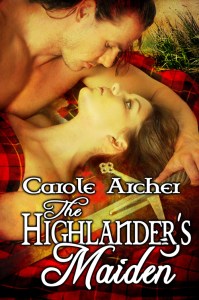 After the death of their father, Colleen O’Shea and her sister Kaitlyn are dragged from their home just in time to escape the invading English. Living in hiding chafes at Colleen, however, and when a foolish decision nearly leads to her capture, she must leave her native Ireland in the company of an old family friend. Then another naïve choice on her part forces her to flee for her life once again, this time all alone in the hard, unfamiliar world of the Scottish Highlands.It is there, lost and desperate, that Colleen is found by Duncan MacGregor, carried back to the village of this tall, handsome highlander, and given a place to stay. As Colleen starts to adjust to her new life, her defiant nature puts her in constant conflict with Duncan, who has declared himself her guardian.

To Colleen’s horror, Duncan is more than prepared to take her over his knee for firm chastisement as often as he feels it is necessary, and she discovers that more serious misbehavior will earn her a much more thorough, embarrassing punishment than just a spanking. Nonetheless, Colleen finds that her feelings for Duncan are growing deeper every day, and she longs for him to claim her as his woman and his wife.Duncan has been enamored with Colleen since he first set eyes upon her. Each time he is forced to discipline her he can barely contain his desire to take her and take her hard, but he will not bring a woman to his bed without first making her his wife.

When a rival lays claim to her, though, he is forced to act quickly, and he soon finds himself the husband of a beautiful, feisty woman—one who he knows will need both his love and guidance and also quite frequently his firm hand applied to her bare bottom.